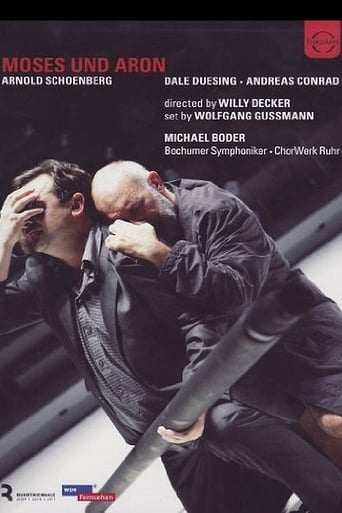 One of the greatest revolutions in the history of mankind happened around 3000 years ago: the transition from polytheism to monotheism through the prophet Moses. God revealed himself directly to Moses, instructing him in absolute truth. Moses was charged with leading the people of Israel to the Promised Land and escaping from Egyptian slavery. Moses came to embody the relationship between the human and divine truth. God’s call to Moses presented a new idea that exploded all previous religious concepts: ‘One God – unique, eternal, intangible, inconceivable’. Moses understands this concept, but is unable to express it, and therefore God appoints Moses’ brother Aaron as his spokesman. They are bound to fail: Aaron can only approach sharing the idea by compromising its meaning, whilst Moses is left to search fruitlessly for “the word I lack …” This production of Arnold Schoenbergs opera was filmed during the Ruhrtriennale 2009.