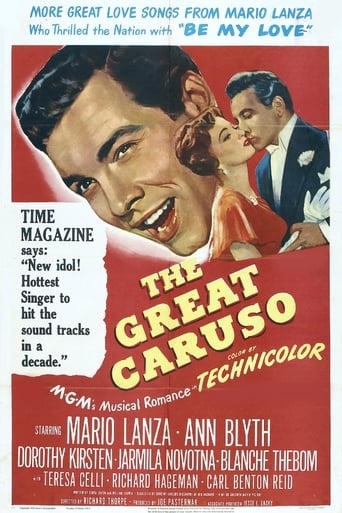 Loosely traces the life of tenor Enrico Caruso (1873-1921). He loves Musetta, in his home town of Naples, and then Dorothy, the daughter of one of the Metropolitan Opera's patrons. Caruso is unacceptable to both women's fathers: to one, because he sings; to Dorothy's, because he is a peasant. To New York patricians, Caruso is short, barrel chested, loud, emotional, unrefined. Their appreciation comes slowly. The film depicts Caruso's lament that "the man does not have the voice, the voice has the man": he cannot be places he wants to be, because he must be elsewhere singing, including the day his mother dies. Throughout, Mario Lanza and stars from the Met sing.