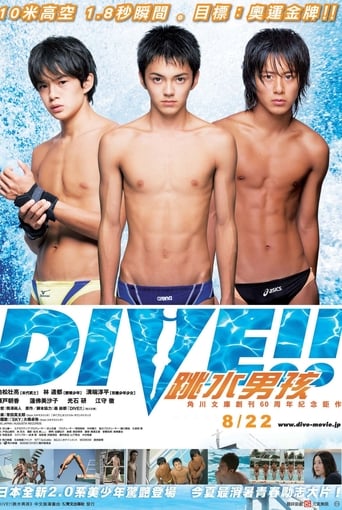 Tomoki Sakai (Kento Hayashi) is your average junior-high student. Fascinated by the diving skills of Yoichi Fujitani (Sosuke Ikemaytsu), an elite athlete born into a family of former Olympic divers, Tomoki joins the Mizuki Diving Club (MDC) where Yoichi trains. However, the club is in the red, and its very survival is under question. Beautiful Kayoko Asaki (Asaka Seto) has just returned from the US and joins the club as a new coach, with the mission to save MDC. Her goal is for the club to produce an athlete capable of competing in the Olympics. She brings in Shibuki Okitsu (Junpei Mizobata), a skillful diver with a wild streak from Tsugaru. Meanwhile, Kayoko discovers that Tomoki possesses a unique ability called “diamond eyes” and inspires him to begin serious training. Tomoki, Yoichi and Shibuki have to overcome personal problems, and struggle through conflicts and setbacks in the sport to achieve their dreams.