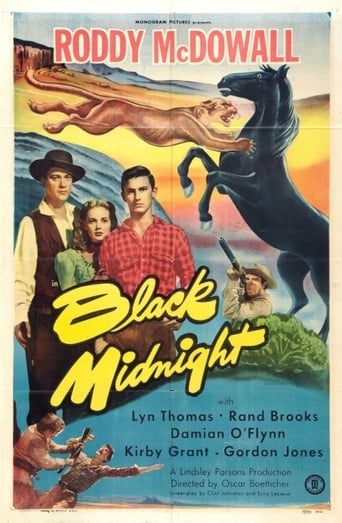 A young man with a love of horses, Scott Jordan (Roddy McDowall) lives on the family ranch with his uncle Bill (Damian O’Flynn). When he buys a wild stallion from his black-sheep cousin Daniel (Rand Brooks), Scott names the horse Midnight and does his best to tame him. But when the sheriff (Sky King’s Kirby Grant) suspects the stallion was stolen and Daniel’s plan to get rid of the horse ends with a man being trampled, Scott must prove Midnight acted in self-defense before his uncle destroys him. The fourth of six films McDowall coproduced and starred in for Monogram Pictures, Black Midnight was directed by Oscar “Budd” Boetticher, whose seven Westerns with Randolph Scott are considered classics of the genre.