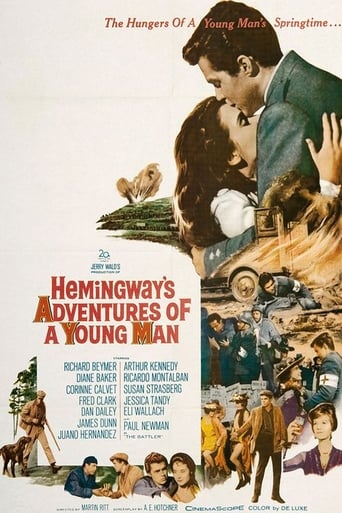 Hemingway's Adventures of a Young Man (1962)

Young and restless Nick Adams, the only son of a domineering mother and a weak but noble doctor father, leaves his rural Michigan home to embark on an eventful cross-country journey. He is touched and affected by his encounters with a punch-drunk ex-boxer, a sympathetic telegrapher, and an alcoholic advanceman for a burlesque show. After failing to get a job as reporter in New York, he enlists in the Italian army during World War I as an ambulance driver. His camaraderie with fellow soldiers and a romance with a nurse he meets after being wounded propel him to manhood.